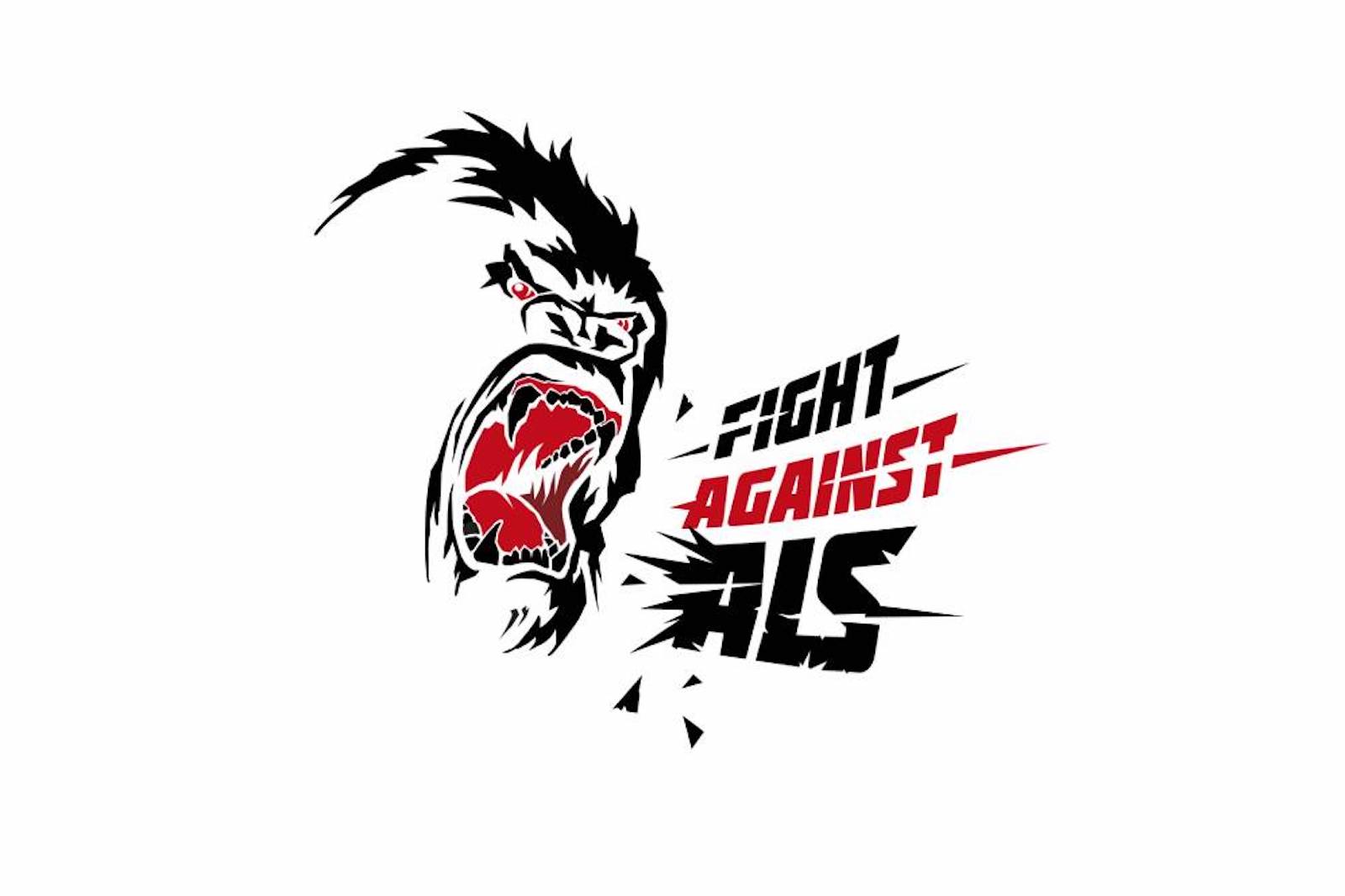 The FIGHT ALS TEAM set a sign in the fight against the still incurable disease ALS. Together they rode the 60km open race and at the same time we tried to collect donations for the DZNE. Thanks to all riders and the event team of the Cyclassics (IRONMAN) for making this great project possible.

The application window for the Fight Against ALS team is closed. We are excited about the huge interest in actively supporting the fight against ALS. Over 100 applications have reached us – many of them with very moving stories and just as many who simply want to get involved in the good cause. An overwhelming response and a great sign for all sufferers of the disease! 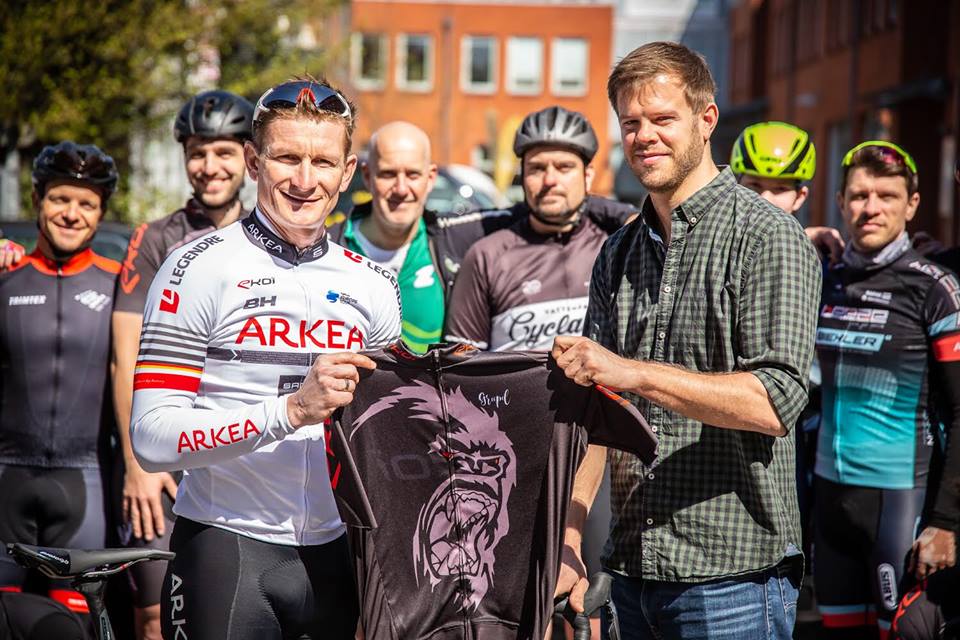 And these are the 20 cycling fans,

the together on 25.08. put a sign in the fight against ALS at the 60km Everyman race.

If you are hearing about the Fight Against ALS team for the first time:

We were looking for 20 participants who will tackle the 60 km distance together on August 25th and support André Greipel in his commitment to ALS research. Be it because they really want to work for a good cause
or someone from their environment is affected by the disease. 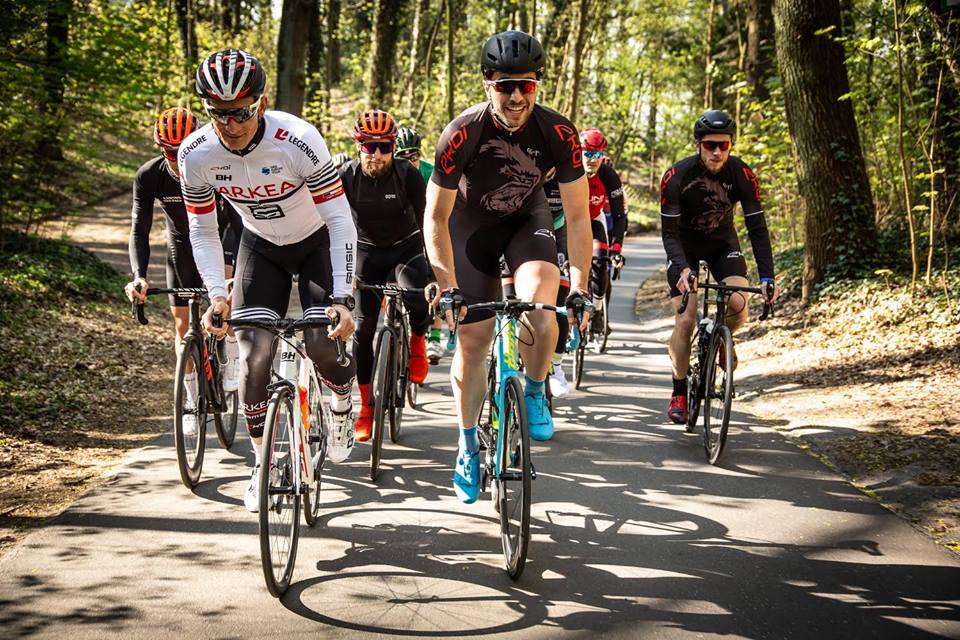 The common goal is to pay as much attention as possible to Andrés commitment and the ALS disease. In the course of this, donations will also be generated, which will then benefit the research study at the German Center for Neurodegenerative Diseases e.V. Our donation target, which we want to achieve together, is 5,000 €. Even if you are not actively launching, you can be part of the Fight Against ALS team by activating your environment for the good cause! The fundraising collection is sent by bank transfer directly to the DZNE e.V. to the following account:

For donations by transfer to the DZNE e.V., a donation letter can be issued by the DZNE. If you would like to have a proper donation letter, please leave the corresponding information (name / first name / full address) additionally in the text field “purpose of use”

You can donate by using PayPal 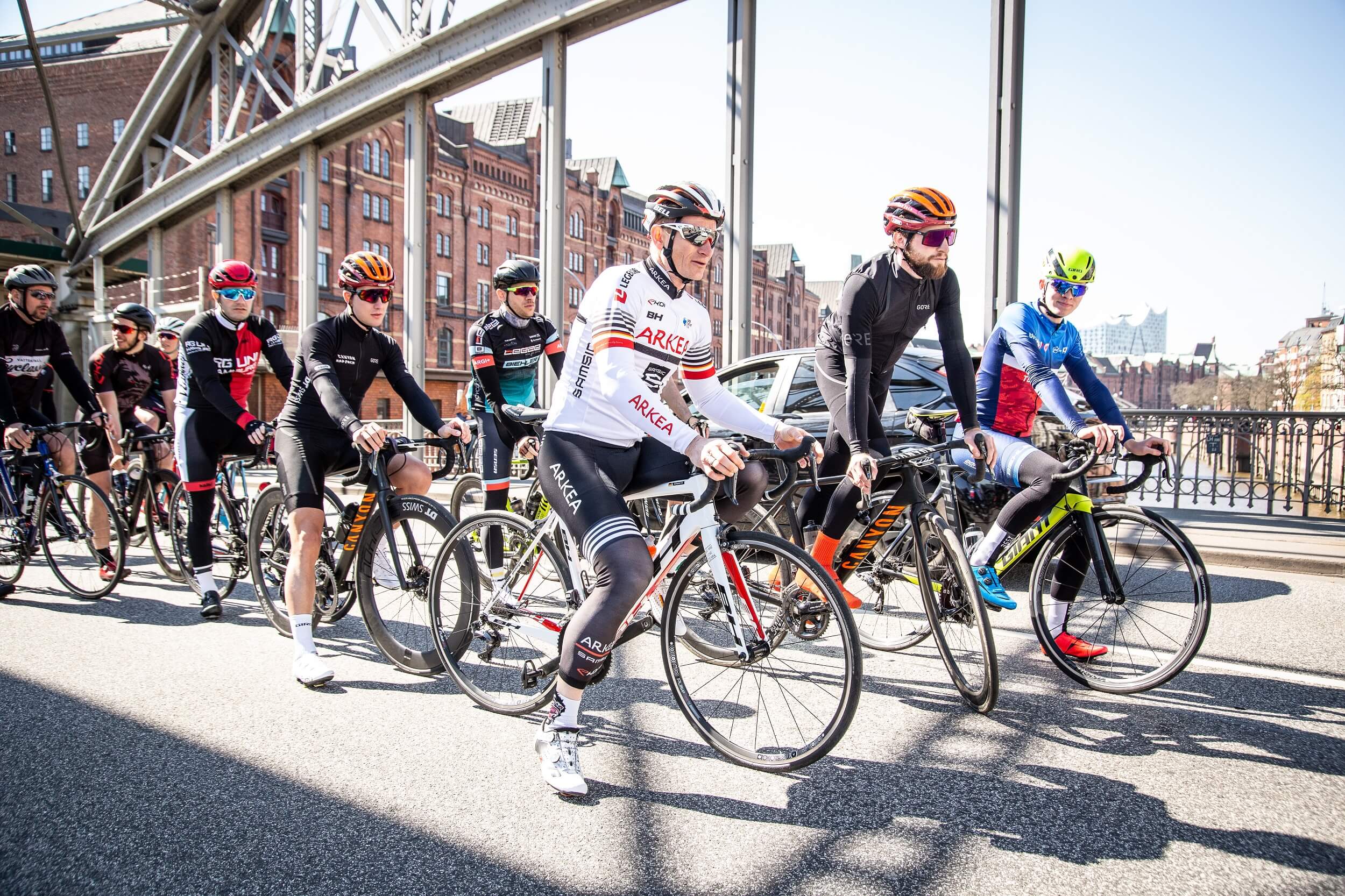 ALS (Lou Gehrig’s Disease) is short for amyotrophic lateral sclerosis. ALS affects the nerve cells in the brain and spinal cord. After all, patients can no longer control their muscles & they become paralyzed. Most patients die within five years after the disease has been diagnosed. André’s mother was also ill with this incurable disease. Therefore, it is a very personal concern for him to advance the research of ALS. Only together can we accelerate ALS research, so any donation will help us. Here you can find out more about their causes, symptoms and effects.

Do your part to fight the disease ALS!

The team partner of my team Arkéa Samsic EKOÏ and I have developed a very special FIGHT AGAINST AS outfit. This includes a jersey available in four different colors as well as matching cycling shorts. For each purchase of jerseys or cycling shorts EKOÏ donates € 5 each to the DZNE (German Center for Neurodegenerative Diseases). The outfit is now available here: www.bit.ly/EKOÏ_ALS .

Everyone can help us fight ALS* & the rapid research of this still incurable disease. Thanks for your support. 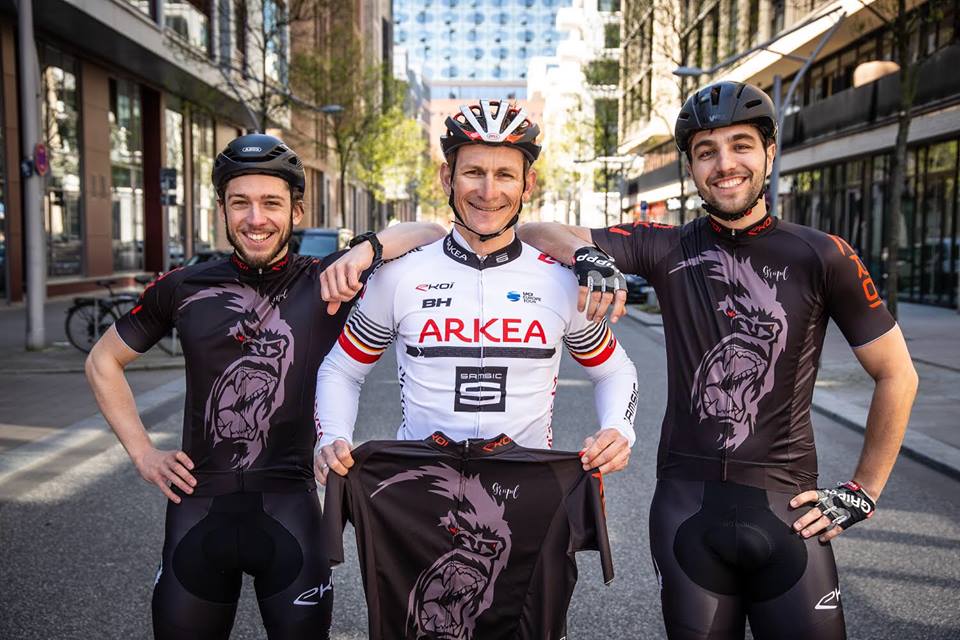 Join me and a lot of other ZWIFT user on February 10th as we ride together and raise funds for ALS research.
We’ll have a group workout together with time to chat about the FIGHT AGAINST ALS, how to support and of course cycling as well.
Those who complete the workout with me will unlock the in-game “Fight ALS” jersey.
Wear it with pride.

There are 2 possible events you can participate.
More details in the links below.

COME RIDE WITH US!

If you want to help the FIGHT AGAINST ALS, please donate to

Any amount is appreciated.

You can donate by using PayPal

or transfer your donation directly to the DZNE e.V.:

DONATIONS RECEIPT
WHEN DONATING THROUGH BANK TRANSFER TO THE DZNE e.V, A DONATION RECEIPT CAN BE ISSUED BY THE DZNE.
IF YOU WANT A PROPER DONATION RECEIPT, PLEASE ADD THE NECESSARY INFORMATION (NAME / FIRST NAME / FULL ADDRESS) IN THE FIELD PURPOSE OF DONATION.

IF YOU DONATE BY  PAYPAL, PLEASE KEEP IN MIND, THAT I AM NOT AUTHORIZED TO ISSUE A DONATION RECEIPT. 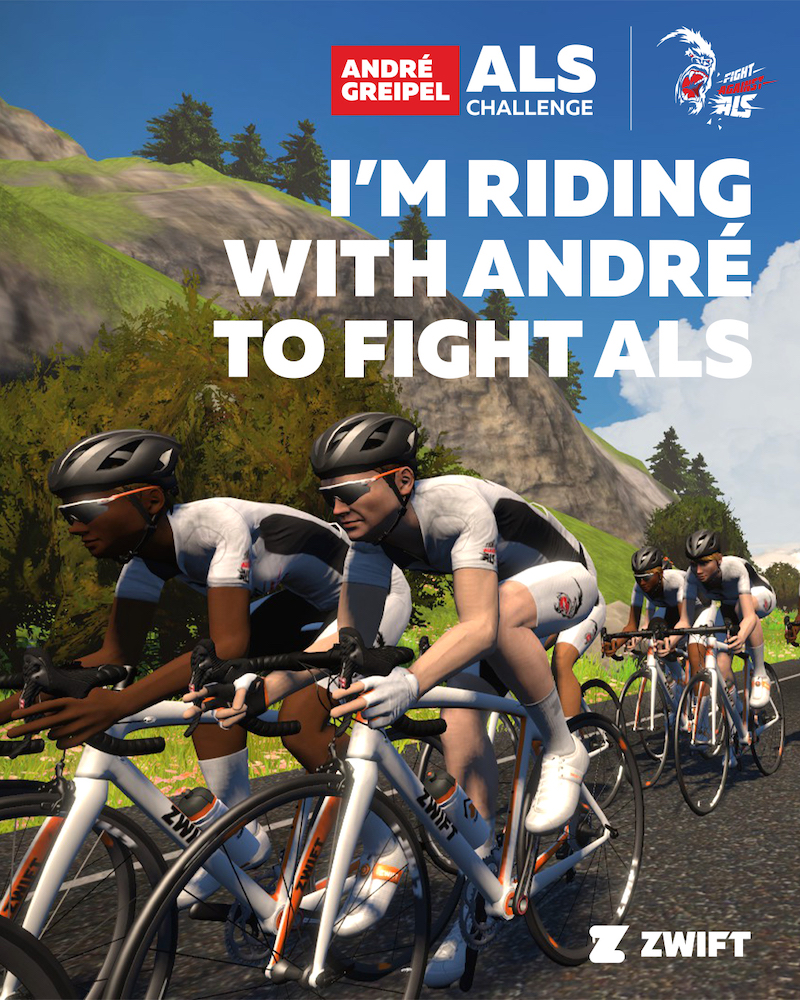 WHY DO WE FIGHT ?

ALS (Lou Gehrig’s Disease) is short for amyotrophic lateral sclerosis. ALS affects nerve cells in the brain and the spinal cord. Eventually, patients cannot control their muscles. They become paralyzed. Most patients will die within five years after after diagnosis. My mother was also diagnosed with this incurable disease. Therefore, it is a very personal concern for me to advance the research of ALS. Only together, we can accelerate ALS research. Please support us with your donation.

At the moment we support the financing of a research study at the DZNE e.V. (German Center for Neurodegenerative Diseases). The study is on „Cognition in ALS correlated with metabolic activity as measured by FDG-PET: a longitudinal study“.The study is supervised by Prof. Dr. Prudlo and his team. Over a period of three years the study will examine ALS patients for their higher brain functions (cognition) and their behavior.

The donations that are generated through this campaign go entirely to the ALS research. In addition to his work for DZNE e.V., Prof. Dr. Prudlo works as a senior physician at the Neurological Clinic of the University of Rostock and treats my mother and other ALS patients there. If you wan to know more about the work of Prof. Dr. Prudlo and his colleagues, please check out the website of DZNE e.V..

THAT WAS THE PAST ZWIFT CHARITY RIDE 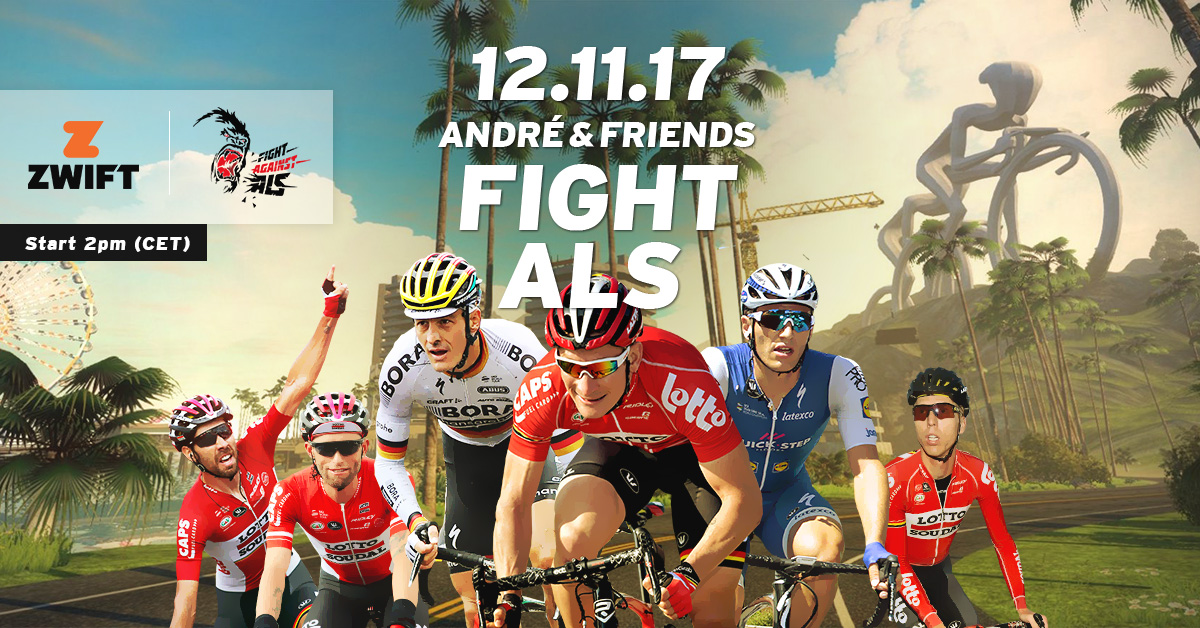 On this uniqueZWIFT Charity Tour on 12.11.2017 cyclists from all over the world went to the virtual start to raise money for the ALS research. This was our team of professional team mates who were there as guides in each group.

Here you can see the film for the application of the event – Thanks to Zwift.